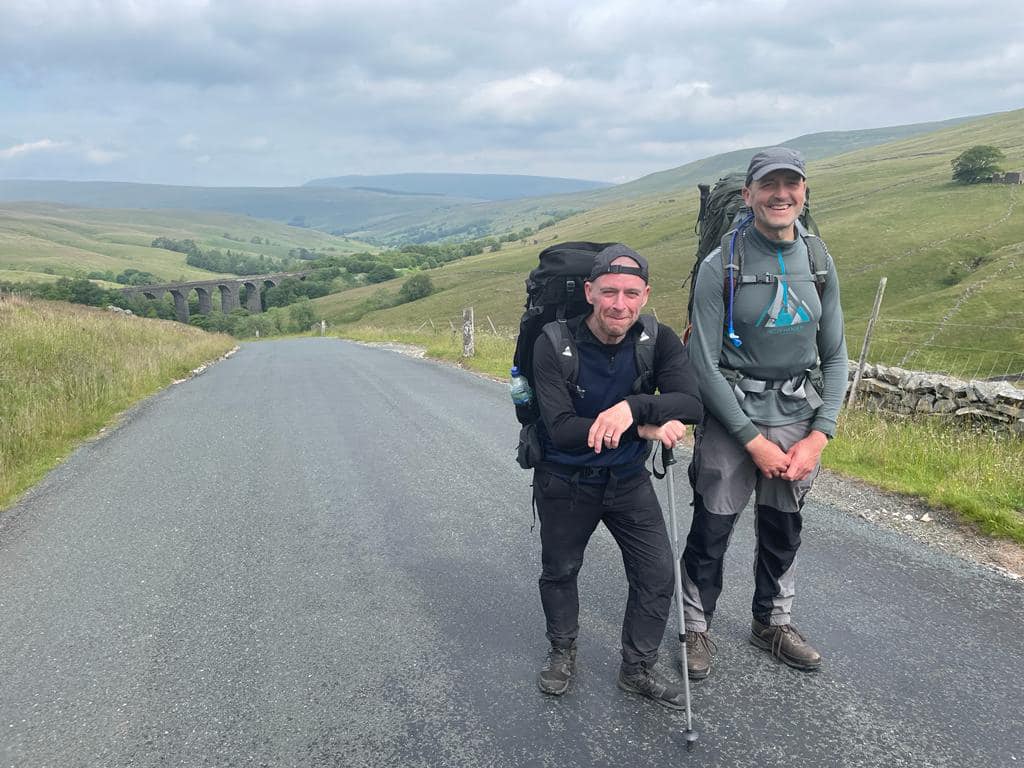 Steve Hardman and Darren Sephton raise nearly £3,000 on their Walk4Chris in memory of Chris Hardman.

Stephen Hardman (53) from Burscough and Darren (Daz) Sephton (55) from Wigan took on the “The Dales Way” – 100 miles from Harrogate in Yorkshire to Bowness in Cumbria and raised nearly £3,000 (plus gift aid) for Rainbow Hub on their Walk4Chris challenge in memory of Steve’s son Chris who died in 2020, aged just 17, from Mitochondrial disorder.

The two friends started the walk on 21st June – an epic adventure of over 105 miles in total – they faced extreme peril, went through heatwaves and thunderstorms walking until they were absolutely broken and then carried on.

They said, “we have blisters, bites, sprains, aches and pains.  We have been scared, spooked, hungry and tired.   We got lost, found, up, down and virtually out at times but we made it.  And, despite everything, we have laughed until we cried, hugged, bonded, met old friends and made new ones.  This was for Christopher and everyone at Rainbow Hub – it has been the experience of a lifetime and we hope that we have done you guys proud.”

As they finished their walk on Sunday 26th June, Darren, speaking for them both, said, “We want to say a huge thank you to everyone who has walked with us, donated, supported, messaged – it means so much to us. You helped us smash our £2,000 target and your kind donations will make the world of difference to Rainbow Hub.”

Lyndsay Fahey, Chief Executive at Rainbow Hub, said, “Steve and Darren have been amazing and have certainly done us proud. We are over the moon and we can’t thank them and everyone who supported them enough.  Chris was a very special young man who will never be forgotten at Rainbow Hub.”

Rainbow Hub provides therapeutic services for children and young people with physical and neurological disabilities.  Since 2001 they have supported as many as 85 families per week, helping children to reach their full potential and gain more independence through fun, hands-on activities, while giving parents the support they deserve.  No other organisation offers such a diverse range of services aimed at improving the physical, social and emotional well-being of children with complex needs, as well as reducing the stress and isolation of their families.

We use cookies on our website to give you the most relevant experience by remembering your preferences and repeat visits. By clicking “Accept All”, you consent to the use of ALL the cookies. However, you may visit "Cookie Settings" to provide a controlled consent.
Cookie SettingsAccept All
Manage consent

This website uses cookies to improve your experience while you navigate through the website. Out of these cookies, the cookies that are categorized as necessary are stored on your browser as they are essential for the working of basic functionalities of the website. We also use third-party cookies that help us analyze and understand how you use this website. These cookies will be stored in your browser only with your consent. You also have the option to opt-out of these cookies. But opting out of some of these cookies may have an effect on your browsing experience.
Necessary Always Enabled
Necessary cookies are absolutely essential for the website to function properly. This category only includes cookies that ensures basic functionalities and security features of the website. These cookies do not store any personal information.
Non-necessary
Any cookies that may not be particularly necessary for the website to function and is used specifically to collect user personal data via analytics, ads, other embedded contents are termed as non-necessary cookies. It is mandatory to procure user consent prior to running these cookies on your website.
SAVE & ACCEPT
X